Thinking about how to respond to criticism 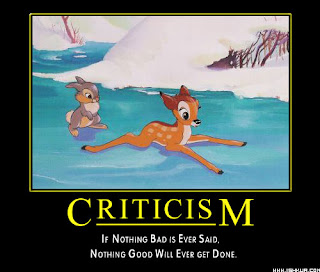 I've returned from a long blogging hiatus for a Public Service Announcement. Do you know what you're supposed to say after someone critiques your writing? Thank you. That's it. Don't argue with their points, don't tell them why they're too ignorant to assess your work, don't describe all the praise everyone else has given the same piece, or how you're certain you're going to achieve massive success with it. You can think these things. Heck, write them down if it makes you feel better, but you don't say them. And I dare say even thinking them is problematic because there's a very good chance that there is a kernel of wisdom buried beneath the comments that raised your ire.

I have a long history with critique groups that I've written about in the past and they have been, unequivocably, vital to my development as a writer. There have been people who I disagreed with, who I felt didn't "get" my work but even they often had very useful feedback. When they didn't, I offered my thanks and walked away, knowing I was under no obligation to do everything (or even anything) they'd suggested.

I know a lot of writers who won't critique the work of people they don't know. Why? Because time and again when they've taken the time to thoughtfully respond to something, the person being critiqued has done exactly what I've advised you not to do above, which means the hours they spent reading and responding to their prose was a wasted effort.

Look, we've all had those moments when criticism rubbed us the wrong way or when it was glaringly apparent that someone missed something or grossly misinterpreted it or decided to be a massive wanker for no good reason. But being snotty in return achieves nothing other than marking you, in that reader's mind, as someone who isn't worth their time. (If you're lucky. Things get much more murky when that nasty-gram you sent off in response lands in the lap of someone more connected that you realize.) Instead of responding with a three page diatribe, offer your thanks, take a deep breath, file away their comments, and later, when you're feeling a little more generous about it, look at their critique with fresh eyes. You may actually find something valuable there.

And thus ends today's PSA...
Posted by kathrynmillerhaines at 7:31 AM